So you want to eat more grains? 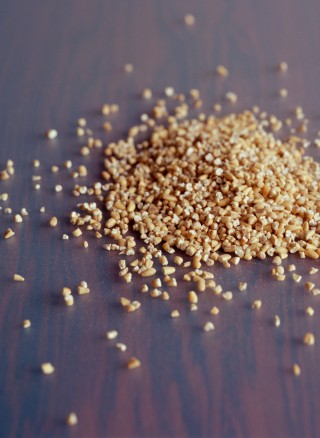 Maybe your doctor has said you have to eat more cereals, or you’ve finally decided now is the time to get healthy and start eating a wider range of wholefoods. Enthusiasm is good, but there is no point rushing down to the health food store and buying packets and packets of unfamiliar stuff you’ve no idea how to use. You’ll wind up with wheatgerm, oatbran and macca powder (didn’t one of the newspapers say it was the new superfood?) and nothing edible for dinner.

Maybe you’ll use a couple of tablespoons in a batch of leaden muffins next weekend but you’ll quickly come to realise that they are awful. Then your purchases will sit in the cupboard unused and going stale while you continue eating as you always have done, convinced that this grain lark is literally for the birds. There is a better, easier way. Remember: you don’t have to change everything overnight when you’re in it for the long haul.

Next time you buy a loaf of bread, try a different one

You don’t have to eat pumpernickel if you hate it. Further down the track you may well find you’ve grown to like those black breads, occasionally, but for now just try a different type of bread from the one you normally buy. If plastic-wrapped white bread is your usual, try granary or multigrain, or a loaf that contains, say, barley and sunflower, like one of the Vogel’s range. If granary or multigrain is your norm, try a light rye bread or a sourdough made from wholewheat and rye. Switch pappy mass-produced brown bread to a heavier organic wholemeal, maybe with sesame seeds sprinkled on top.

The aim here is to trade up to something either darker in colour or coarser in texture, and preferably made with better quality natural ingredients. Give your new loaf a fair go and if you really, honestly don’t like it, not even when toasted and spread with butter and jam, store it in the freezer and use it for making meatballs, or serve it next time you have visitors. Then when you go shopping again, buy another different loaf. Maybe try one from the posh bakery rather than the supermarket. Eventually you will find a several you like.

If you need sandwich bread for family lunches, stick with your usual to start with, but buy it pre-sliced and store it in the freezer so you can easily pick out what you need when you need it. That way you can go through it more slowly without worrying about it going mouldy.

If you ate wholemeal pasta once twenty years ago and decided it was revolting, you were right. But quality has improved substantially. Good Italian manufacturers are now making wholemeal pasta with wheat and various other grains, from speciality wheat varieties such as spelt and kamut to gluten-free grains including corn and quinoa. The excellent La Terra e il Cielo is one of the most widely available brands, though you may have to pick it up from a health food or organic shop.Wholemeal pasta dough is best suited to thin cuts such as linguine, angel hair and spaghetti. These cook quickly, too, so you won’t be waiting much longer than if you had chosen white pasta. Always buy dried – in fact: don’t even think about buying fresh wholemeal pasta, it is a waste of money.

Some sauces work better than others with wholemeal pasta. Anything tomato-y is great, whether it’s a vegetarian sauce or one containing meat or fish. Herb sauces such as pesto are good. Even cream sauces can be fine with wholemeal pasta if they are really made with cream, but avoid roux-based, thickened glue numbers: it’s the pasta that’s meant to be the starch component of the meal, not the sauce.

Once you’re enjoying wholemeal pasta regularly, do as you did with bread and switch it up occasionally to add variety to your diet. For example, choose spelt pasta one week, corn pasta another time, then go back to wholemeal. They’ll all match your favourite sauces. Don’t bother with the really outré (and rather expensive) varieties that are on sale unless you are particularly curious or have a serious allergy to gluten.

Even with world food shortages and increasing demand in the West for Asia’s premium rices, brown basmati still costs just 16 to 35 pence per serving, so most of us can afford to enjoy it regularly. Its fragrance is perfect for Indian and Middle Eastern cooking but versatile enough to work with most other cuisines.Best of all, brown basmati cooks more quickly than other wholegrain rices, which helps ease the transition from white rice. Don’t worry about having to learn a different cooking technique for brown rice – if anything, it’s easier: just rinse it well, boil it in a generous quantity of salted water, then drain and serve.

Walk straight past all the refined oat cereals and oat flakes on the shelf and instead buy medium, coarse or pinhead oatmeal. They’re the proper stuff. Yes they take longer to cook than some products you may be used to, but the taste and nutritional benefits are unarguably worth it.Instant oat cereals are not wholegrain – in fact they are highly refined, making them no better for you than white flour. Rolled oats are healthier, however they are still a processed food: during manufacture they are steamed (ie cooked) to make them soft, then rolled into flakes.

Oatmeal, on the other hand, is simply whole oat kernels that have been ground to varying degrees. Although oatmeal takes longer to cook than instant oat cereal, you don’t have to sacrifice convenience entirely. A bowl of porridge made with medium or coarse oatmeal will take 4 minutes in a microwave oven with a break halfway for stirring. It can cook on the stovetop in as little as 5 minutes when you’re in a hurry. However for the best flavour, toast it in the dry saucepan for a few minutes (stirring occasionally) until fragrant, then add boiling water from the kettle to get it simmering quickly.

If you like muesli, try a wheat-free or gluten-free one

In fact, try a few different sample-sized packs when you see them on sale to find the ones you like best.This step is not about avoiding wheat or gluten in particular, but about eating a wider variety of grains than you do normally. Wheat- and gluten-free muesli mixes will contain an assortment of ingredients that may not typically make it into your diet, such as millet, corn, buckwheat or quinoa flakes.

Switching between a few different brands (not on a daily basis, but from one packet to another) is an easy way to enjoy the nutritional benefits of several different wholegrains – plus all the other healthy foods that mueslis contain.

There are some recipes that are just awful with wholemeal flour, and let’s not pretend that you will never enjoy them again. But you can take positive action to vary your grain intake even when you want or need to use white flour. How? By buying one made from spelt. Contrary to popular belief, spelt is one of many different types of wheat and, just like common wheat, can be sold in wholegrain or refined forms.

So, rather than buy plain white flour next time you need some for cooking, pick up some white spelt flour, such as that sold by Dove’s Farm, and use that instead. No one will be able to tell the difference one the packet is open, and you’ve added instant variety to your diet with very little effort.

Once these basic habits are part of your routine, you’ll find it much easier to include other grains in your diet. And, even if you never get round to purchasing quinoa, millet or stoneground polenta, you will already have expanded the range of wholefoods you eat on a regular basis. 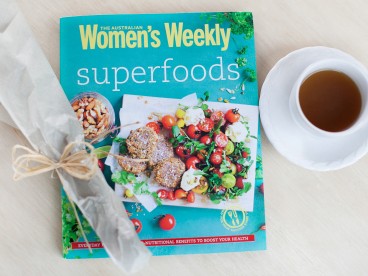 Quinoa bircher with dates and walnuts